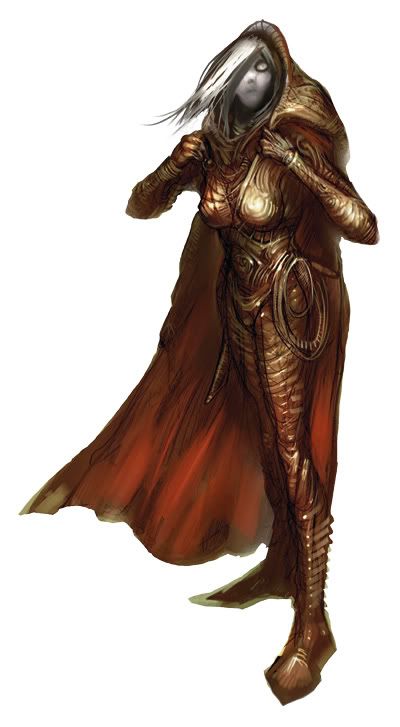 A doppler is a devout follower of the Subconscious Arts. She focuses on the sociological aspect of her environment and manipulates it to her advantage. She is a divine caster that worships the concept of adaptability and subterfuge. The main subject of study for the typical doppler is the titular Doppelganger, and their Changeling offspring. Their clergies could be considered a mixture of an arcane cabal and a criminal syndicate, as they can usually be found being hired as spies or doing research into new Enchantment, Illusion, or Transmutation magics.

The clergies are usually lead by Doppelgangers, Changelings, and sometimes Mimics that have ventured outside of their dungeons. Through careful study and research into the transmutation magics used by Shapechangers, the aspiring doppler seeks to become one herself through experimentation and augmentation of her own body. The more accomplished dopplers eventually achieve this and go on to lead their own clergies.

Dopplers are excellent party faces, and generally tend to fill this role almost naturally. When not in social situations, the doppler becomes a battlefield controller with it's limited Illusion, Enchantment, Divination, and Transmutation spells. When confronted in melee, the doppler usually resorts to attempting an escape.

Abilities: Dopplers focus on Charisma more than anything, as their spellcasting and most of their abilities run off of it. The next most important ability would be Intelligence, so that the doppler can get more skill points per level.

Dopplers are divine spellcasters with a focus on social interaction and controlling their foes. All of the following are class features of the doppler.

To learn or cast a spell, a doppler must have a Charisma score equal to at least 10 + the spell level. The Difficulty Class for a saving throw against a doppler’s spell is 10 + the spell level + the sorcerer’s Charisma modifier. Like other spellcasters, a doppler can cast only a certain number of spells of each spell level per day. Her base daily spell allotment is given on the table. In addition, she receives bonus spells for a high Charisma score (see Table 1-1 on page 8 of the Player's Handbook).

As a follower of the Subconscious Arts, the doppler gains access to domains. Each domain gives the doppler access to a domain spell at each spell level she can cast, from 1st on up, as well as a granted power. The doppler gets the granted powers of both the domains selected.

With access to two domain spells at a given spell level, a doppler learns one or the other when she gains access to a new level of spells. She may “unlearn” a previously learned spell in place of a new spell of the same level at any time she would gain a level.

The doppler may choose two domains from the following: Trickery, Shadow, Mind, and Transformation.

Should a doppler wish to "retire" a cover identity and develop a new one, she must spend one week rigorously practicing subtle vocal intonations and body language before she earns the bonuses. Cover identities do not in themselves provide the doppler with additional skills, proficiencies, or class features that others might expect of the professions pretended. Thus, a doppler must be careful to choose identities that can withstand ordinary scrutiny.

Your devotion to the subconscious arts have given you insight into the intricacies of the mind, at 2nd level you can always take 10 on: Bluff, Intimidate, Gather Information, Diplomacy and Sense motive, even when distractions and stressful situations normally would not allow it.

A doppler’s continued devotion to the has given her specialized knowledge in dealing with others. At 4th level she gains a +1 Insight bonus to Bluff, Diplomacy, Intimidate, and Sense Motive. This bonus increases by 1 at 10th level and again at 16th level (to a maximum of +3 at 16th level).

The doppler has chosen to focus her studies towards social interactions. While her mind advances, her body atrophies. For every level that her apotheosis advances, she permanently loses 1 point in one of her physical ability scores. This loss of ability score is permanent and cannot be reversed. Not even a Wish or Miracle can reverse it. She cannot choose the same score two times in a row. The doppler’s intense dedication to her studies rewards her with an eventual transformation into the subject of her studies, the doppelganger:

At 2nd level the doppler gains the augmented subtype and the shapechanger subtype. She also gains Minor Changeshape. When using her Minor Changeshape or Change Shape ability, a doppler gets a +10 circumstance bonus on Disguise checks. Her mental development has enhanced her senses as well, giving her Low-Light Vision and Darkvision out to 30 ft.

Minor Changeshape (Su): Dopplers have the ability to alter their appearance as though using a disguise self-spell, this does not affect their possessions. This is not an illusory effect but a minor physical alteration of features. The doppler can use this at will and lasts until they choose to change again or are killed in which case they revert to their natural form. A true seeing spell reveals their natural form. When in use this ability gives the changeling a +10 circumstance bonus to disguise checks. Using this ability is a full-round action.

At 5th level her augmentations have extended her Darkvision out to 60 ft.

At 8th level the doppler has furthered her studies and has gained more abilities similar to a Doppelganger, she gains the Detect Thoughts ability. If she can read an opponent’s mind, she gets a further +4 circumstance bonus on Bluff and Disguise checks when using her Minor Shapechange or Shape Change abilities.

Detect Thoughts (Su): A doppler can use detect thoughts as the spell (caster level equal to her levels in doppler; Will DC 15 + Cha negates). She can use this ability a number of times per day equal to her class level + Charisma modifier

At 11th level she has mastered her ability to alter her form and has replaced her Minor Changeshape with the Doppelganger’s Change Shape ability. Along with this, her body has begun showing signs of her transformation. Her true form change to the characteristics typical of a Changeling.

Change Shape (Su): A doppler can assume the shape of any Small or Medium humanoid. In humanoid form, the doppler loses its natural attacks. A doppler can remain in her humanoid form until she chooses to assume a new one. A change in form cannot be dispelled, but a doppler reverts to her natural form when killed. A true seeing spell or ability reveals her natural form.

At 14th level her transformation is complete: Her type changes to Monstrous Humanoid, she becomes immune to sleep and charm effects, gains +2 Intelligence and Charisma, a +4 to Wisdom, and she gains a +4 improvement to her natural armor bonus.

At 6th level the doppler has learned to cast her spells by force of personality alone. The doppler may choose to apply the Silent Spell metamagic feat to her spells a number of times per day equal to her her Charisma modifier (minimum 1). When she does this, she casts the spell at a +1 caster level. Doing so is a swift action.

At 13th the doppler gains the ability to steal the identity of her victims through the use of a special ritual. The ritual takes 1 hour per stolen identity (minimum 1) to complete. The victim must be helpless or restrained for the entire duration of the ritual. The doppler must also succeed on a Concentration check with a DC equal to (10 + her levels in doppler). Success results in the victim being executed and the doppler stealing it’s identity. When an identity is successfully stolen, the doppler gains all of the victim's memories, mannerisms, and habits. Failure results in the doppler not gaining the new identity, with the victim still being executed. The doppler can do this an additional time at 16th level and again at 19th level. Stolen identities are counted as cover identities and as such count as increase the amount of cover identities you have.

When the doppler is operating within one of her deep cover identities, her mind is so thoroughly trained and conditioned to think like the person she pretends to be that any magical scrying or mind reading at a power level short of deific reveals nothing about her true nature. Only the thoughts, alignment, and emotions of the fictitious persona can be detected.

Dopplers in the Game[edit]