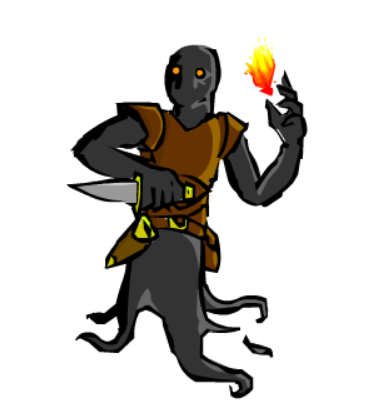 Diamond Hearts resemble a blob of shadow, although some can concentrate enough to form itself into the shape of a creature of similar size eventually this shape may become natural to the Diamond. They often have two lights that represent eyes.

Typically staying around 4'-6' some may be larger due to a larger diamond being their heart. Some Diamond Heart's may stray from the norm and have lighter colors a few have been known to be light or dark blues instead of blacks. A Diamond Heart's weight is entirely dependent on the diamond used.

They have no strict alignment or religions they follow

Age. Age advances if left alone or around people that are not it's creator this ultimately depends on the shade.

Alignment. Shades vary between evil and good to not having a care in the world.

Size. Shades tend to always be between 4'-6'but depending on the amount of magic and the size of the diamond they can exceed 10' in height.

Speed. Your base walking speed is <40> feet.

natural feather fall up to 30' if wearing light armor. Due to the nature of a Shade Diamonds body only falls of 30' or higher will have adverse effects.

Natural armor. The diamond which gives the Shades life moves around in the body to avoid damage giving a +2 to their AC.

Spell Specialization. Shades can specialize in a single touch spell (Related to their class) to make it a ranged spell (10' range)

Immunity. Immune to poison and disease not magical in nature.

Weakness to magic. Shade Diamonds take a -2 to saving throws against magical effects and an extra 2 points of damage from magical sources. This effect does not affect healing cast on the Shade or spells cast by the Shade.

Languages. Common, and creators base language (With DM approval.)

Diamond Heart's started being made by magic users to be free help in organizing and writing, eventually being used as soldiers by some states, soon they were made by possessing a diamond with the mind of a fallen creature. When artificial Diamond Heart's were made by strong magic users, some sought them out for partners in combat and even love. The choice was left to the individual Diamond's.