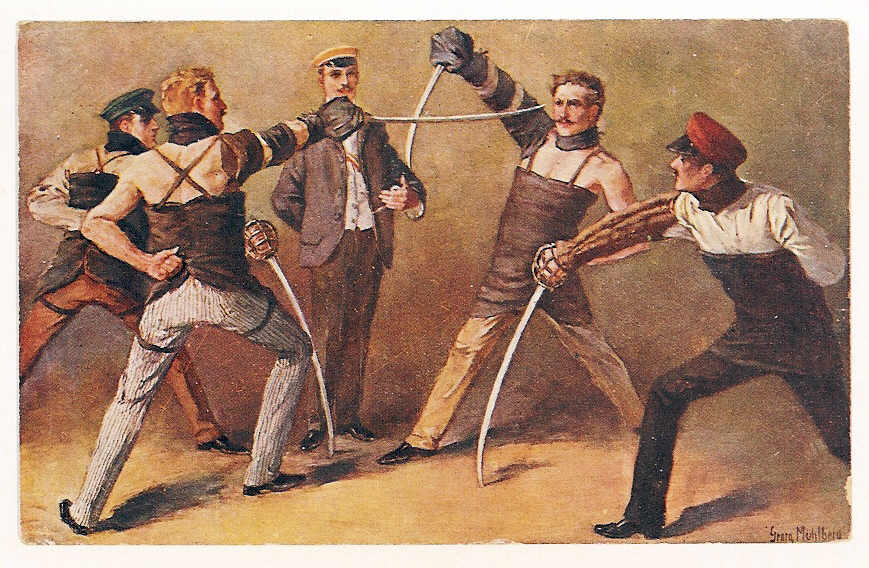 A dastardly swordsman battles against several opponents with blades flashing and tongues lashing.

All the world's a stage, and none know this better than the loose conglomeration of Dastardly Swordsmen. They know, from deep in their heart of hearts, that every battle is a farce; every magic item, a plot device; and every hero, an inevitable victory. A Dastardly Swordsman, (or Dastard, as they are sometimes known,) draws from his deep understanding of theatrics and applies it to the world at large. Dastardly Swordsmen are larger than life.

Villains are made, few see themselves as the bad guy those that do become Blackguards, a Dastardly Swordsman has a starting place... long ago I was like you. Still it takes more than a turn of back luck to turn bad intentions into a rightful bastard. A Dastardly Swordsman needs panache and training.

All of the following are class features of the dastardly swordsman prestige class.

Weapon and Armor Proficiency: Dastardly Swordsmen are proficient with all simple and martial weapons, plus the whip. A dastardly swordsman gains no other armor or weapon proficiencies.

Detect Hero (Sp): From their deep understanding of theatricality, dastardly swordsmen come to the realization that they are the antagonists of someone else's life story. The trouble comes from finding that someone. For this reason, Dastards have developed the ability to detect do-gooders and their auras in the same manner as Clerics and Blackguards. At will, a dastardly swordsman can use detect good as a spell-like ability, replicating the effect of the detect good spell.

Weapon Savvy (Ex): The ability that sets dastardly swordsmen apart from any other swordsman is their ability to put on a stunning performance in any battle. With a light weapon, rapier, whip, or spiked chain made for a creature of his size category, a dastardly swordsman may use his Charisma modifier instead of his Strength modifier on attack rolls. If he carries a shield, its armor check penalty applies to his attack rolls.

Smite Hero (Su): Dastardly swordsmen are villains, and villains have but two jobs. First, to take over the world. Second, to take out all those pesky heroes that stand between them and their first job. Once a day, a dastardly swordsman of 2nd level or higher may attempt to smite an good creature with one normal melee attack.

He adds his Charisma modifier (if any) to his attack roll and deals 1 extra point of damage per class level. If a dastardly swordsman accidentally smites a creature that is not good, the smite has no effect but it is still used up for that day.

At 5th level, and again at 10th level, a dastardly swordsman may smite good one additional time per day.

At 8th level, the bonus increases to +4. This bonus stacks with the benefit provided by the Improved Initiative feat.

Dastardly Dispensation (Su): Dazzling swordsmen know that the key to being a recurring villain is to avoid dying. A dastardly swordsman applies his Charisma modifier (if positive) as a bonus on all saving throws.

Diatribe (Su): Dastardly swordsmen turn the battlefield into a stage, and their combat taunts amount to expository monologues. If a Dastard's speeches catch an opponent off guard, he has the opportunity to inflict extra damage while using dramatic effect to cow and discourage his opponent.

Diatribe, sneak attack, and sudden strike damage all stack if they apply to the same target.

Get to the Point (Ex): A dastardly swordsman's understanding of theatrical timing allows him to draw his weapon and attack at the optimal time for maximum damage. When a dastardly swordsman makes an attack roll immediately after drawing a weapon and his target is flat-footed, he may make a special quip check with a bonus equal to his dastardly swordsman level + his Charisma modifier as a free action. Dastardly swordsmen with 5 or more ranks in Perform (comedy) may use their uncanny understanding of the effects of proper timing to gain a +2 synergy bonus on this roll. The results of the roll determine the amount of additional damage done, as shown on the following table:

This damage is not cumulative with diatribe damage, sneak attack damage, or similar abilities if the dastardly swordsman has them.

Quick Draw: At 9th level, a dastardly swordsman gains quick draw as a bonus feat. He can draw a weapon as a free action instead of as a move action. He can also draw a hidden weapon (see the Sleight of Hand skill) as a move action.

A dastardly swordsman with quick draw may throw weapons at his full normal rate of attacks (much like a character with a bow).

'Fallen' Dastards may be interested in joining the number of Dazzlers by becoming good-aligned dazzling swordsmen.

Combat: These play the same role as a rogue slash fighter

Dastardly Swordsmen in the World[edit]

Characters with ranks in can research dastardly swordsmen to learn more about them. When a character makes a skill check, read or paraphrase the following, including information from lower DCs.

Dastardly Swordsmen in the Game[edit]