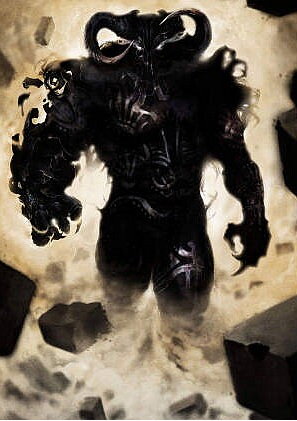 "I'd never imagined the consequences would be so comprehensive..." -Anonymous Darksoul

A Darksoul is born when a spellcaster binds himself to a powerful evil spirit, demon or forgotten god. Their souls are bound to each other and they start sharing the same body, mind, heart and soul. Through the process the former creatures soul is darkened, hence the name Darksoul. Many Darksouls don't realize what sacrifice they have done to obtain their new powers, but when the drawbacks begin to set in, they discover the real cost of this unholy pact they've made. The spirit inside the Darksouls grant powerful abilities and a mastery of the dark arts. Furthermore they desire survival of their host to ensure they survive as well. The only drawback is that the spirit often wants something in return, this can be anything from a gold coin to whole emotions or family members. As the Darksouls power increases so does the size of the drawbacks. In the end the Darksoul looses his humanity, possesses deadly magic, and becomes an all-powerful master of the dark arts.

A lot of spellcasters seek great power. Some search for this in books, others in forbidden magic, and some try to inherit the power of other powerful creatures. Many spellcasters with some greed or hunger for power pursue this prestige class because it is rather simple and easy to become once you've located a powerful evil spirit. Those who can not resist the temptation or simply don't care about the price become Darksouls. It is a quick path to great power which is why mainly sorcerers become Darksouls, because many Sorcerers don't posses the same knowledge about the arcane arts as wizards do. Although some wizards and even bards have been seen falling for the temptation for great and fast power. A high Charisma score is important because this raises the chances to resist the evil spirit within the Darksoul and also because the Darksouls abilities becomes harder to resist. Like Sorcerers and Wizards, Darksouls benefit from high Dexterity and Constitution scores.

All of the following are class features of the Darksoul.

Spellcasting: At each level, you gain new spells per day and an increase in caster level (and spells known, if applicable) as if you had also gained a level in a spellcasting class to which you belonged before adding the prestige class level. You do not, however, gain any other benefit a character of that class would have gained. If you had more than one spellcasting class before becoming a Darksoul, you must decide to which class to add each level for the purpose of determining spells per day, caster level, and spells known.

The Dark Arts: Black spell A Darksoul is granted the secret of the Dark Arts by the spirit within him, as he progresses new mysteries are solved, granting him access to powerful magic. Three times per day, the darksoul can add the "Black spell" descriptor to any of the spells he can cast. It changes any damage the spell does to "darkness" damage, which cant be resisted (and thus bypasses any damage reduction). It also Increases the save DC (if any) with 2, and doubles the duration of the spell.

Shadow Flames At second level the evil within the darksoul manifests on his body as black flames on the Darksouls right arm. these flames can't by put out and don't spread any illumination. The flames does not burn anything the Darksoul touches, unless that is his intention. These Shadow Flames can also be used as a weapon. Hitting an opponent with a melee touch attack forces him to make a reflex save (10+your Darksoul level+Cha modifier) or catch on fire, every round he looses 1 point of constitution because the flames burn his body with evil. The flames can't be put out by normal means, but remove curse will put out the flames.

The Dark Arts: Spell Mimication At second level the Darksoul learns how to cast spells he normally can't cast, at the cost of his health. To use Spell Mimication, the Darksoul first decides which spell he wants to cast. This can be any spell from any spell list, arcane or divine, though he must be able to cast the same level of spells himself. When he has chosen a spell, he must then sacrifice the double constitution score that the spell he wants to cast has as spell level. this means if he wants to cast a 3rd level spell, then it will cost him 6 constitution score points. The Darksoul can also use the body of other willing targets to pay the constitution cost. Any willing creature within 30 yard radius from the Darksoul can pay the price instead. The constitution heals back at normal rate.

Sign of Terror At Third level the evil within the Darksoul manifest as some greater sign of evil (the DM´s choice). This can be any kind of transformation on the Darksoul like a Spiked spine, Giant horns, big sharp teeth, Burning eyes, a pointy tail, black skin or great claws. It can also manifest as some sort of magic like hes footsteps leave burning cinders or all normal plants he touches dies. The Sign of Terror provide the Darksoul with a +2 constitution because the evil inside him boosts his body.

The Dark Arts: Reaper´s Slash At 3rd level the Darksoul learns how to reap the life from his enemies with a single powerful strike. Twice per day, The Darksoul can attack any creature within a 60 ft. radius with Reaper's Slash. The Darksoul must hit with a ranged touch attack, then an effect unfolds depending on the HD of the victim. Using Reaper´s Slash is a standard action.

Darkness Eternal Upon reaching 5th level the evil within the Darksoul and the Darksoul fuses together in body and soul, forming a new terrifying monster to behold. The Darksoul transforms into a humanoid looking creature with whatever evil features matching the Sign of Terror (the DM´s choice of course). This takes form as a +4 bonus to strength, a +2 bonus to all others ability scores, a +5 bonus to natural armour and a 5/- damage reduction. Furthermore the Darksoul become nearly unkillable, if the Darksoul is reduced to -10 hit points then whenever his body(or the rest of his body) is subject to complete darkness(such as a normal night without starlight) his body rejuvenates with full HP and no level loss.

Mastery of the Dark Arts: Shadow Form As the Darksouls body fuses with the evil within him, he is gifted with mastery of the Dark Arts. Once a week, the Darksoul can transform his body into a terrifying creature of pure evil, which manifests as a gargantuan shadow-like monster with fiery eyes and mouth. Transforming into this mighty monster takes 1D4 rounds. When in this form, the Darksoul gain a large number of benefits. The Darksoul is treated as undead in every way (except that he cant be turned), he gains +20str and +10con due to his new giant form(the increase in con grants him 5 times his present HD as temporary hit points for as long he is in this form or until lost), all attacks on the Darksoul has a 40% miss chance because his body is half made of shadows and he gains the imp. grab and Swollow whole ability. The Darksouls hands is treated like claws and does 4D6+10 points of shadow damage on a successful hit, then the Darksoul can attempt to swallow the creature(if it is gargantuan size or smaller). When a creature is swallowed whole it takes 40 damage each round and must make a fort save on 21 or die. a creature can attempt to escape be dealing 30 damage to the inside of the Darksoul. The shadow form lasts for 10 minutes, or until the Darksoul decides to end the effect which takes 1D4 rounds.

If the Darksoul succeeds in splitting his soul from the evil spirit he is no longer a Darksoul. he looses all class benefits from this class and can instantly trade levels in the Darksoul prestige class to any other class he have at a 1 for 1 point basis, thus a 7th level wizard/4th level Darksoul which splits his soul from his evil spirit can instantly trade the four levels in Darksoul to four wizard levels. However, splitting the soul from the evil spirit is almost impossible and few if not none has been known to succeed in this task.

Resources: Darksouls are very rare. Most of all because Darksouls tend to travel the world alone because they´ve lost all their friends(usually the evil spirits work). If a Darksoul however embrace hes evil ways there is alot of assistance to find in any organisation dealing with evil acts.

Darksouls fit into any D&D world. They can be found wandering about the countryside in search of a cure to their illness. Some however can be found using their great powers for own gain, then they appear like villains in search for even greater power, world dominition, a powerfull artifact ect. ect.

Characters with ranks in Knowledge (arcana) can research Darksouls to learn more about them. When a character makes a skill check, read or paraphrase the following, including information from lower DCs.