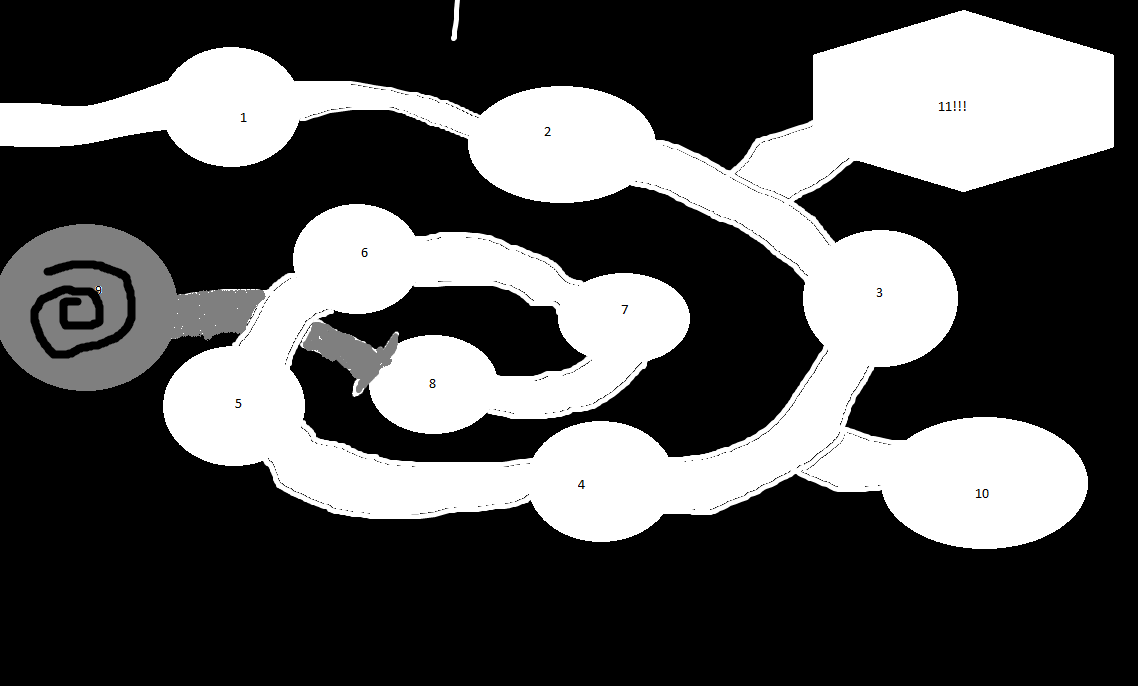 In the local Caravansary at an Oasis our heroes are told multiple times of a huge bounty from slaughtering a clan of deadly Hyena men bandits who live in the deep deserts and come out to raid Caravans and slaughter all the people and animals and devour them. It is said that they have a fabulous horde of treasure in their caverns.

Jamal is the tavern keeper, he has several adventures posted on the board and offers drinks, hookahs and food.

Fatima is a healer who offers healing services.

They players will need to scout the location first. They can choose to hit the caverns at a time when the Bandit warbands have mostly left or when they return (leave in the day and return at night) Once the players find the cavern in the deep deserts they must move from cavern to cavern, slaughtering enemies. There are some prisoners who are kept in cages and can be released. The entrance could be sealed by illusions which fools non magical players into thinking the bandits are walking through walls. There is a massive Grootslang sleeping at the buttom of once section of the caverns and can be unleashed. There is also a powerful ring with a Djinn who can grant lesser wishes. In Turn this Djinni can send players on quests to find a greater Djinn in an urn.

the Inn owner can openly inform them of this cavern with it's deadly thieves. The Sheikh can also give this information, people in the Caravansary frequently talk about it.

Many of the merchants hate that bandit caverns and will collectively pay 20gp per head of bandit, jibi and seme

The night before the players make their way to the caverns they have a vision of a Lioness goddess battling with a male lion and gutting him with her Khopesh. Suddenly a great swarm of bees fly into his gutted body and produce a hive producing blood honey. She stands before the dead lion roaring in victory. Description of this dream and deciphering it will require a Arcana/Religion check Dc. 16. This will reveal that the goddess was sekhmet and she slayed an evil male lion and from her victory the bees produced sweet honey.

"The lady of slaughter, She who embodies the power of might, The daughter of sun and protector of dead kings at night!"

Area 10 and 11 are also blocked with illusions that look like landslides because they are protecting large treasure caches.

The Answer is a Beehive inside the carcass of a lion.

There is a house. One enters it blind and comes out seeing. What is it?

The first stage can require sneaking into the cavern past drunken or sleeping guards, as players progress the guards become more self aware.

The scenes can involve saving imprisoned people from the Bouda and their Jibi servants. as characters descend the lower levels this can also act as a step.

Ant nests are relatively easy to spot Dc. 12 and they release a swarm of insects.

Oil pots are also easy to see and when thrown create an 15 foot by 15 foot area that slows any creatures that step into the area... they can also be set on fire dealing 1d6 fire damage a turn for 1 minute in area. Players can also collect oil pots.

Punji Pitts Attack +5 8 (2d6) deal piercing damage; when creatures fall into them and are not easy to detect Perception (Dc. 16)

Cage Traps Are Traps that deal no damage but drop a cage on a player from the ceiling, Perception Dc. 16. Strength Check Dc. 20 to break free.

Log Barricade are simply log walls that block off room 10 and 11, they require a strength check to break through Dc. 20

A large number of Seme, Bouda, Jibi and a few Ismaris Quaris (1-3) dwell there as Malomba, Ant Swarms, Izulu lightning birds. Too Translate feel free to use several Kobolds who work for Gnolls in the dungeons with human bandits, throw in some werehyenas (werewolves) as sargeants of these packs or mini bosses. Finally their are a few Werehyenas who have some innate magical powers with their spellcasting serpent familiars, they are the chiefs of the caverns complex.

The Jibi (Gnolls/Bugbears) act as shield bearing combatants, the Seme (Kobolds) are swarming and ranged minions, the Izulu (lightning firing quasit) hang back and launch energy at armored targets. The Bouda (Werehyena) act like elite assassins spring from the swarms of Jibi/Gnolls and leaping at soft targets. Finally the Qori Ismaris with Malomba familiars act as potent debuffers and healers with great combat capabilities.

Also this is a way station for several warbands of hyena men, so when players rest the dungeon has a high chance to be partially repopulated (50%).

In rooms 3, 5, 7, 8 and 10 There is a Bouda (Werehyena) Sarjeant with a 500gp-1000gp gem or a treasure chest of equal worth surrounded by Jibi (Gnolls) and bandits so the fight will be challenging but worth it.

In room 9 there lies a massive sleeping Ancient Grootslang who can easily TPK party but this giant beast can be lured from his slumber to go crashing through all the areas of 8,7,6,5,4,3,2 and 1 killing or knocking aside anyone or anything in his way from the dungeon.

In room 8 there is a pen for prisoners to perform labor such as working on a grinding mill and producing floor.

In rooms 1,2,4,6 There are just Seme with giant bats and hyenas riding around watching prisoner pens.

In room 11 there is the final boss "Shomari" a Qori Ismaris with his Molomba familiar Safiri There is a massive treasure cache worth 2000d10gp (10,000gp on average maximum 20,000gp if DM is feeling generous)

Shomari has a magic ring which houses a Djinn "Abd Al-Uzza" who is said to known the location of a truly powerful Djinn Sultan who can grant wishes but he is imprisoned inside a sacred incense censor. The Ring when donned can cast spells that a Djinn can cast and the Djinn can be summoned in combat.

If the players get knocked out and captured they will be imprisoned in area 8 where amble amounts of smoked meat and palm wine are stored. Hence DM's should not be too afraid of TPK's because most of them will end with the party getting knocked out and turned into slaves. The players will also be forced to work in a mill grinding grain. Thankfully their is an ample supply of white lotus found in the dungeons as well as pots of oil, players can be creative and use grind down white lotus to use as a sleeping poison Dc. 17 while they can easily use oil pots as makeshift traps to set areas on fire. Where the prisoners are kept there is a deep pit with a massive sleeping Ancient Grootslang (High level purple worm is fine) and if agitated it awakens and goes on a killing rampage out of the cavern system. The Ancient Grootslang is far to powerful for players to kill and if they fight him it will probably end in TPK but he will also easily kill the bandits, gnolls and the rest of the enemies in the tunnels now the players might have to disguise themselves to look like the enemy but if they do this they will easily fool the Ancient Grootslang.

The final Qori Ismaris with his servant malomba oversee a large treasure cache (possibly 10,000gp or more) if he is slain or tricked out of his tunnel players can finally gain access to the great loot storage.

There are several great treasure chests littered through the cavern system each having 100d6 gp. The final chamber has 1000d20gp of treasure within, the players will definitely become rich from fighting in this dungeon. There are also several finely crafted and slightly enchanted (+1) weapons strewn through the cavern system. Various spell scrolls can be found with a small chance (10%) of finding truly high powered 8th and 9th level spell scrolls. lesser magical rings, wands and other items can be found within the cavern system strewn about but none of them should be above +2 enchantment rating and the majority of these items should be (+1 75%).

If all goes to plan characters will have gained a few levels. they would gain a magic ring with a djinn servant who can take them on a higher level journey to discover a more powerful item known as the "Censor of the Shah".

The minimum total award for each character participating in this adventure is 6,500 experience points.

The maximum total award for each character participating in this adventure is 14,000 experience points.

Ring of the lesser Djinni a Powerful +2 ring that gives the wearer a +2 bonus to AC and can summon a Djinn who can fight or cast spells. The Djinn is slain is simply sent right back to the ring and takes a day to recuperate. If the Ring is broken before the Djinn is given freedom is the only way to slay him.

There are cracks on the cavern wall where the sun shines down and from these areas scouts are watching the party. If they players kill any of the prisoners word will spread of their misdeeds. Alternatively magi scouts will find the den after it has been cleared and they will speak with the dead, the dead prisoners will tell them of what the heroes did if it got the prisoners killed. Word will spread of the heroes killing prisoners and they will be targeted by rebels.

If the prisoners are saved (one of the best ways to do this is to hide them in hay carts or wrap them in rugs) then word will spread of the heroes and they will be approached by Rebel warriors as well as Magocratic agents in the field who will offer aid. Also donating gold to the Rebel cause will automatically give players a vast rebel alliance with access to secret fortresses hidden in the deep deserts.

Each character receives 30 downtime days at the conclusion of this adventure.