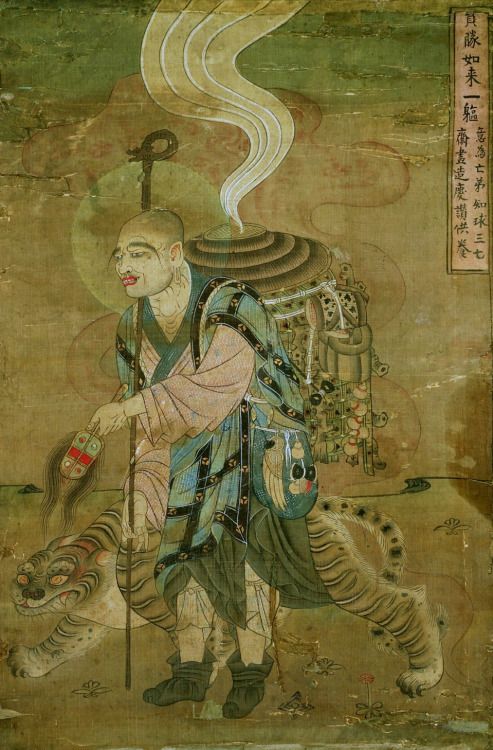 This is public domain

Bosastsu are wandering monks who travel with the sacred texts and traditions of their monasteries and also provide powerful divine magic from their Saintly ancestors and Gods of the Tranquil heavens. They have been known to heal the sick and injured, dispel terrible curses and banish horrible plagues as well as occaisonally break from their pacifistic traditions and strike a Terrible Oni or Akama down into a prison of Jade and banish it into the Ten Thousand Hells.

Bosastsu specialize in healing and using their martial arts to deflect attacks and avoid damage. Play a Bosastsu if you want to have a hbyrid of a Monk and a Cleric who is focused more on Enlightenment and teaching wisdom and not overtly obsessed over worshiping one god. Have the Bosastsu focus on primarily defensive magic while his combat ability alone can deal decent damage.

Races: Generally Human but Tengu, Kitsune, Naga, Soratami and various other races have been wandering saints or Bosastsu in the past.

Alignment: Any Good or non evil.

Starting Gold: As a Monk.

Starting Age: As a Monk.

Bosastsu are Master Healers and wandering Pilgrim Monks who bring sacred texts and teaching to new monasteries in the Northern Realms of Zhong... Though their great temples are located in Naag and Sindhu in the kingdoms of the Naga and the Sindhu.

Weapon and Armor Proficiency: All of the following are class features of the monk.

Spell Strike: Even in the thick of melee combat a Bosastsu can cast spells and heal others, Especially if he has placed a "Celestial Character" Orision on an ally.

Unarmed Strike: At 1st level, a Bosastsu’s gains Improved Unarmed Strike as a bonus feat. A monk’s attacks may be with either fist interchangeably or even from elbows, knees, and feet. This means that a Bosastsu’s may even make unarmed strikes with her hands full. There is no such thing as an off-hand attack for a monk striking unarmed. A monk may thus apply her full Strength bonus on damage rolls for all her unarmed strikes.

Elemental Qi: Spending one Qi point per attack can convert the unarmed strikes into a Elemental damage of choice; Fire, Ice, Lightning, Acid.

Bosastsu are not proficient with any armor or shields.

When wearing armor, using a shield, or carrying a medium or heavy load, a Bosastsu loses her AC bonus, as well as her fast movement and flurry of blows abilities.

Qi Style Combat: The Bosastsu can only use certain Qi styles of combat such as Bojutsu, Sojutsu, Karate, Jujutsu or Kyodo. Generally any style which is considered Universal can be learned by the Bosastsu.

AC Bonus (Ex): When unarmored and unencumbered, the Bosastsu adds her Wisdom bonus (if any) to her AC. In addition, a Bosastsu gains a +1 bonus to AC at 5th level. This bonus increases by 1 for every five monk levels thereafter (+2 at 10th, +3 at 15th, and +4 at 20th level).

Spells: Spells: A Bosastsu casts divine spells, which are drawn from the cleric or Druid spell list. However, his alignment may restrict him from casting certain spells opposed to his moral or ethical beliefs; see Chaotic, Evil, Good, and Lawful Spells, below. A Bosastsu must choose and prepare his spells in advance (see below) but He can spontaneously cast spells from chosen domains.

Like other spellcasters, a Bosastsu can cast only a certain number of spells of each spell level per day. His base daily spell allotment is given on Table: The Cleric/Druid. In addition, he receives bonus spells per day if he has a high Wisdom score. A Bosastsu also gets one domain spell of each spell level he can cast, starting at 1st level. When a Bosastsu prepares a spell in a domain spell slot, it must come from one of his two domains (see Deity, Domains, and Domain Spells, below).

Bosastsu can spontaneously cast only from the Domains he is attuned to and Bosastsu start the game with two Domain but a Bosastsu can change to a new domain after a week of contemplation.

Bosastsus meditate or pray for their spells. Each Bosastsu must choose a time at which he must spend 1 hour each day in quiet contemplation or supplication to regain his daily allotment of spells. Time spent resting has no effect on whether a cleric can prepare spells. A cleric may prepare and cast any spell on the cleric spell list, provided that he can cast spells of that level, but he must choose which spells to prepare during his daily meditation.

Powers Known: <-Delete this section if this class does not manifest powers. description of manifesting abilities: on what stat save DCs are based, on what stat bonus powers points are based, and what stat determines the highest level power that can be manifested.->. <-pluralized class name-> choose their powers from the following list:

Maximum Power Level Known: This column determines the highest level power he can learn at this level.

Spell Potency Qi=1 for every re rolled dice in a damAge or healing spell.

Bosastsu lose their powers when they become evil or when they become incredibly greedy, hedonistic and or materialistic. Though Ex-Bosastsu are incredibly rare they just devolve into corrupt preists and healers who live in the forest... who have fallen for wordily vices and commune with evil spirits.

Religion: Bosastsu are wandering monks who are trained in divine magic. They carry various important religious texts and artifacts with them as they spread the religion of Samsara northward. Their religion does not worship one singular Saint (Bodhisattva) who has reached Nirvana or a state of extinguished desire and enlightenment, though their written works, deeds and acts are recorded and used as anecdotal lessons to teach future generations of monks and lay folk. The Bosastsu wander ever to new lands to quietly spread civilization, peace and enlightenment to the masses. Bosastsu do recognize the various Kami and pay them respect as temple guardians but the majority of their religion does not fall into the worship of mercurial deities. It is said in the great Astral realm there is an Artifact known as the Diamond Monolith with the sacred written texts of various Bodhisattva's recorded upon it... This object has some level of awareness but it lies dormant and sleeping. Various celestial entites like Yakshinis and Daevas have also converted to the religion of Samsara though and they will come to the aid of Bosastsu when called upon.

Other Classes: Bosastsu and Yamabushi are distant brethern and Yamabushi will generally offer protection to Bosastsu. Shugenja are neutral to Bosastsu because of the differing religions but their shrines and temples can overlap in many great cities.

Combat: Bosastsu are primarily casters who can use self defense if necessary.