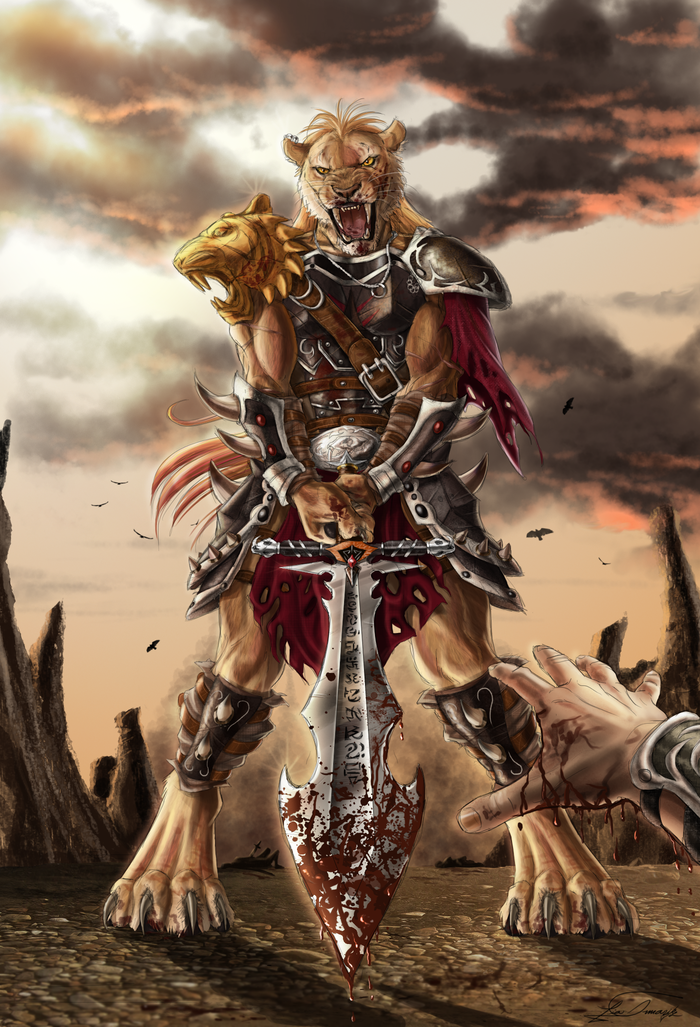 Andarra Bloodmane, a force of terrible fury and rage, prepares to execute yet another victim.

As to who exactly Andarra Bloodmane was before becoming a Champion of the Ferine is unknown, for her surname is one accepted well after. At times refereed to, albeit incorrectly, as "The Bloodmane", Andarra is an exceptionally savage Half Elf Champion of the Ferine, with an aggressive demeanor that is only suppressed by the tranquility that follows the ferocity of combat. Iconic among many more minor communities, and mention of her name raising eyebrows in those of which are superior, she is bound by no constraints and acts with behavior some claim as spontaneous. However, Andarra is far from spontaneous in nature, short of her temper, and plans forth her actions well in advance; what it is, in truth, is that her actions favor neither the good nor the evil, as she answers to a power that mortal men fail to acknowledge. Her voice, at times compared to that of a Nymph, lambasts those who consider themselves "civilized" with snide, belittling remarks; the subtle growl she speaks with growing louder in doing so, one can find it most pronounced, despite the otherwise natural purity of her tone, when she assumes her Alternate Form. With this it is well known she is seldom seen outside of her Alternate Form, a shape which she seems to have wholly embraced and taken on the identity of, enough so to the point that few, if any, know her half Elven mortal form.

Her respect, as difficult as one would find it to earn, is unwavering; those who more than prove themselves to her, a bar set well above any reasonable standard, she tolerates in varying degrees. Thought less modest and more hasty in her reactions to snap at those who irritate her, Andarra Bloodmane is combative with any and all who dare try her patience in the slightest. While calculating, her patience, when worn thin, results in brash decisions on her part, ranging from making use of a more reckless offense to simply getting into a skirmish with the offending individual, justified or not. Exploiting her lack of identity and natural Elven blood, Andarra drifts from town to town in disguise, completing whatever objective favors her and the beasts of the wild.

Wandering adventurers need be wary of her presence, for tidings good and bad follow her.