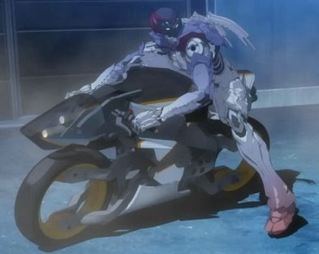 Gerd Frentzen, a human amalgam, in his demoniac form on his motorcycle.

Some people choose to pursue this class to become one with their weapons but some are forced into it due to coming into contact with an Amalgam. Useful abilities for Speed Amalgams are Dex for Abilities, Con for survivability, and Wis to improve their will saves to overcome their crazy mind and stay sane.

All of the following are class features of the Amalgam (Speed).

Demoniac Form Ex – the amalgam can take on a form made of special metal that covers their entire body. Each amalgam has a different looking demoniac form that each gives a unique power depending on which amalgam type they are. The 3 different amalgams are power, speed, and ranged. They can enter this form for a number of times per day equal to their Wis mod and may maintain this form for a number of minutes equal to their amalgam lvl + Wisdom Mod. In this form the amalgam gains natural armor +2, dodge bonus = dex mod, movement bonus +25ft

Symbol the amalgam has a symbol on the front of one of their two hands (roll a d2 to determine). The symbol for each amalgam looks different and symbolizes that they are amalgams. This gives a -10 to disguise against anyone that knows that the symbol represents that their amalgam.

Crazy Mind will save 10 + 2 every odd amalgam lvl fail = everyone looking like a mindless amalgam minion for 1d4/2 minutes. Activates every hour.

Weapon of Choice the amalgam chooses one martial or exotic weapon. This weapon can be summoned from the amalgams symbol at any time even while not being in demoniac form. The amalgams weapon of choice is infectious and can spread the Nano machines into the bloodstream of another person or creature if they deal enough damage (50% health) or turning them into a mindless amalgam minion if they kill them. They can have a number of creatures under his control as minions whose total HD do not exceed his own. must be melee weapon.

Fire Immunity the nano machines that live within their bloodstream have made him evolve making him immune to even the harshest of flames. This is constantly in effect.

Merge Metal/Machinery the amalgam has learned to, in their demoniac form, to merge themselves with other metal objects or machinery at will. If the enemy has the metal on their body they must succeed will save 10 + ½ amalgam lvl + Wis. Mod. If the amalgam merges with machinery that is bigger than them than the top half of them will appear somewhere on the machinery showing that they are in control. If the amalgam merges with some kind of metal weapon than its infectious just like their weapon of choice.

Improved Demoniac Form 1 – an amalgam becomes more powerful in their demoniac form at lvl 3 and every odd lvl thereafter. superior finesse with weapon of choice and extra die of damage, speed +25ft, dex +2

Poison Immunity the nano machines that live within their bloodstream have made them evolve making them immune to even the most lethal poisons.

Regeneration the Nano machines within the amalgams body begin to heal the body of the amalgam at an extreme rate. They regenerate an amount of hit points equal to their amalgam lvl each round. Severed limbs regrow in 2d8 minutes. Weakness fire and acid.

Cold Immunity the nano machines that live within their bloodstream have made them evolve making them immune to even the coldest of colds. This is constantly in effect.

Disease Immunity the nano machines that live within their bloodstreams have made them evolve making them immune to even the most horrid and fatal of diseases. this is constantly in effect.

Perfect Self upon attaining 10th level, an amalgam no longer takes penalties to their ability scores for aging and cannot be magically aged. any such penalties that they have already taken, however, remain in place. bonuses still accrue, and the amalgam still dies of old age when her time is up. the amalgam does not need to breathe, eat, and drink anymore. they can also activate and stay in demoniac form an infinite amount of time.

Advancement: any class that goes well with high dex and high speed.

Resources: <-What kind of assistance members of this class can expect from each other including possible organizations->

<-Where characters of this class fit in a d20 world->

NPC Reactions: <-How NPCs react to characters of this class->

Characters with ranks in <-the appropriate skills-> can research <-insert prestige class name-> to learn more about them. When a character makes a skill check, read or paraphrase the following, including information from lower DCs.

Adaptation: <-Fitting this class in your campaign->